My multi-talented friend, Audrey took these great pictures. I love them! 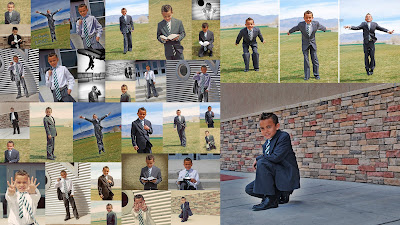 Stuff I don't want to forget!

There's been alot happening at the Cash home and it's all stuff I don't want to forget about. So here it goes:
Traekon
Traekon turned 8! Am I really old enough to have a 8 year old? He was baptized on March 26th and had lots of family and friends here to support him. He sang "I'm Eight" which was written by Grandma Norma. He sang so good, and i'm sure there was hardly a dry eye in the whole crowd. His toe popped up so he got to be baptized twice! The spirit was so strong that day. It was such a good day! He got to start scouts and loves it so far.
Traekon also fasted for the first time and did so awesome. He never complained about being hungry and lasted until 3:30. He's already a better faster then me! I am so proud of this kid!!
We headed to the dentist last week and the dentist informed us that Traekon's very large front teeth are blocking the way for his side teeth to come in, so we get to head to the orthodontist this week. Pretty sure he's going to cost me a mini fortune by the time we're finished with this mouth! Here's a picture of his big ol choppers:) Someday they are going to fit in his mouth and be beautiful! 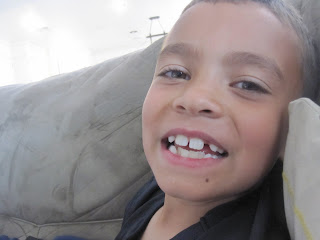 Kenzi
Kenzi started kindergarten this year and loves it. She comes home excited to do homework which we weren't used to with her big brother who would try his best to get out of doing it! It's a nice change. Since Hudson's been born she has become the second mommy. She even loves to change his diapers all by herself! She's a keeper. She learned Traekon's baptism song along with him and loves to sing it at night before bed. Killed two birds with one stone, because now I don't have to teach it to her in two years!
Kenzi is currently in gymnastics and is pretty natural at it. She is currently on the "pre-team" and goes two days a week for a hour and a half each time. I just recently went to a parent meeting and they informed us that when they make "team" they will need to come to gymnastics 3 times a week, for 3 hours each time. What?! That's crazy!! Nothing is recreational around here. We'll see what happens with that. I guess if she loves it enough we'll consider??
Kenzi also went to the dentist and has her first two cavities...ugh! I'm afraid the girl has bad teeth like her mother. 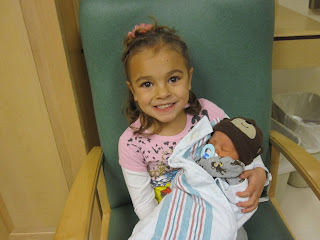 Ashton
Ashton just makes us laugh, period. We can't get enough of this funny little guy! He says the most random, funny things and we love it. He's in preschool and he just eats it up. I wish I could remember some of his randomness, but of course I forget to write it down and then forget whats said altogether! Next time...
Ashton loves Hudson. He can make him laugh pretty good and insists on hugging and kissing him every hour. He's definitely our most lovey dovey kid. He tells me everyday someone new that is his best friend.
Ashton also went to the dentist and did really good, but wouldn't let them x-ray his teeth so hopefully he doesn't have any hidden cavities festering in there! 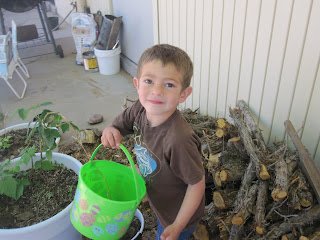 Hudson
Hudson started smiling at 3 weeks and started giggling at 11 weeks. He is now 12 lbs and and 23 inches long. He loves to smile! He is a momma's boy. He's pretty content as long as he's in my arms. It's been so fun having such a big gap between Ashton and Hudson. The older kids love to hold and help take care of him, sometimes to his dismay! We started letting him sleep in his swing (not swinging) when he was around 3 weeks because he was so congested and we still have him sleeping in it at night. I know, bad! But hey, he sleeps 7 hours straight sometimes so I can't give it up. Don't judge, you'd probably do the same thing for a little sleep!
Hudson got blessed the same day Traekon got baptized. He screamed through the whole thing! Sad to say I payed more attention to the screaming then the blessing! I'm sure it was a great blessing I just couldn't hear it! 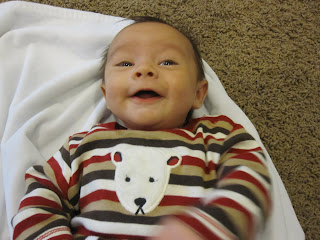 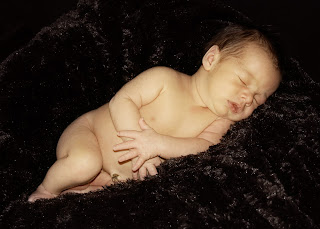 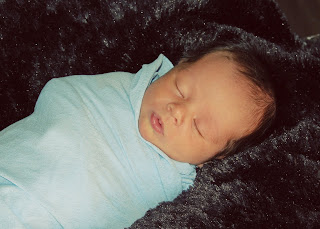 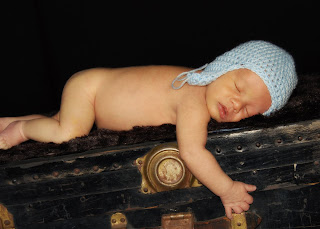 Our family of 5 has now become 6! Hudson Kupono Cash made his appearance January 17, 2011 at 11:50 a.m. He was 6 lbs 10 oz and 19 inches long. He is such a sweet little guy and we all love him to pieces. All my sisters were able to come out and babysit me and my family the week he was born, and then Grams came the next week to take care of us. I'm so grateful for such a loving family who was willing to come and help! You're all awesome!!
Posted by Cash Crew at 5:09 PM 4 comments:

So as always with any kind of journaling I've completely slacked! For some reason its so hard for me to take the time and just write whats happening in our lives down. I thought this blog would help, but apparently not! So needless to say two months have gone by with a whole lot of stuff that went on and no memories written down so my family can remember it. So here it goes... the last two and a half months:
March
Traekon and Ashton's b-day 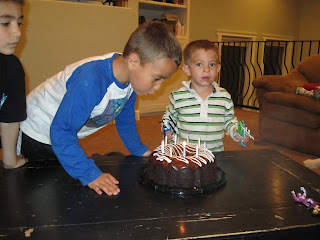 Asthon turned 3 and also started to wear underwear(actually that might have happened in February). Yoohoo! As of now we are diaper free for the first time in 7 years and loving it=). Ashton's idea of the perfect outfit is his undies and his rain boots. Wish I had a pic cause it's pretty darn cute. Traekon turned 7 this month. We did a joint party for the boys during spring break with the Brown cousins here to celebrate with. Nothing like pizza, presents, and cake! Thats my kind of party. We had a blast with the Browns here visiting us and did lots of fun things. The fun all went out the window when it snowed the saturday of spring break though! Soccer for Traekon started in March along with gymnastics and ballet for Kenzi. Todd ended up coaching the soccer team but I don't know how he felt about it. We both don't know anything about soccer other then kick the ball in the goal. So whether the boys actually learned something? Who knows! 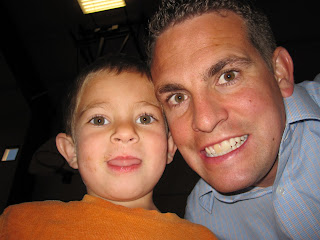 April started with Todd turning 31. He's feeling 31. Especially when he goes and plays b-ball! He says he just stands at the 3 point line and waits to get the ball passed to him. April also brought the wind...Yuck! We had a baby shower for Kamron which went super good. I had asked Todd to put grass in before the shower probably 2 months in advance. He came through the week of, but only because his wonderful mother came and helped us get it done. She's amazing! If only I could be more like her (sigh). Anyway I think April might be my one year mark in primary. One year down... It actually went pretty fast. I have awesome counselors who keep me going! April cruised by fast for sure... 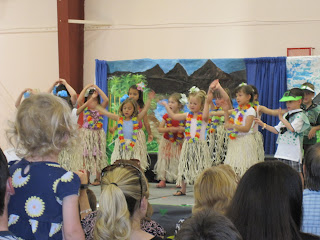 May means end of the year field trips. We've already been to Village pizza with Kenzi and bowling with Traekon. This week its the Natural History Museum with Traekon, and the park with Kenzi. Okay that's not a ton, but it feels like it to me! We are having super awesome weather and my flowers are beautiful. Todd says it's because its on an automatic sprinkler timer, meaning that if it was up to me to keep them alive they'd already be dead. Rude! But sadly true=(. Kenzi had her Preschool Graduation Program last night. She was a hula girl for her part in the play. She was of course the cutest hula girl up there! She also got the award "The most adorable" from her teachers. They can't get past how little and adorable she is. I can understand why. She's just a little thing measuring in the 5% for her age. I wonder who she takes after?
Posted by Cash Crew at 3:49 PM 7 comments: 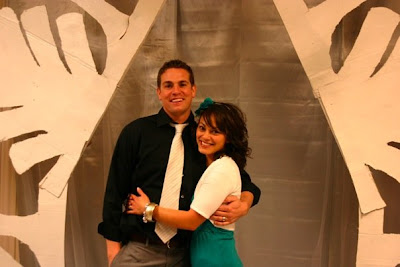 Can you believe I've spent eight years of my life with this guy?! The best, worst, funniest, saddest, craziest, happiest eight years of my life! We figured out today that we have lived in 9 different residences, 3 different towns, and have three kids to show for it. I love, love, love him! No one can make me so mad I want to spit to laughing my head off within minutes. Here comes the sappy part so you can stop reading but....I love him more today then ever and know that it will continue to grow as we get older and wiser. He completes me. I can't imagine my life without him! Here's to a happy eight!
Posted by Cash Crew at 3:00 PM 4 comments:

Traekon did come back and the first thing he did was give me a hug and tell me he was sorry for being so mean. He must have stewed about it all day. I also stewed about it all day and know that I could have handled it a lot better. Thank goodness for children who forgive and forget easily! Thats all.
Posted by Cash Crew at 10:28 AM 1 comment: 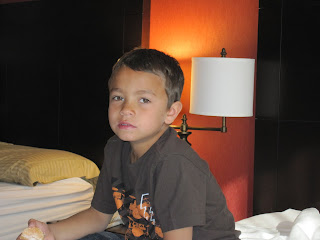 So Traekon is all grown up today and proclaimed that he was running away. Oh and that he hated me. Alas, it is true from the words of my 6 year old " you are the meanest mom". Traekon loves to take his time getting his chores done in the morning so when it came time to brush his hair and teeth he had no time. He was appalled that I made him leave without doing these two very important things because he was g0ing to look "dumb". Yep he's already worried about his image. Oh and so funny... we've been telling the kids how they are following satan when they are grumpy and angry. So he also told me that I was following satan. He was pulling out the punches this morning for sure! How badly I wanted to let him just do these things, but I stuck to my guns and now I'm wondering if he'll actually run away after school or if he'll return? Guess we'll find out at 4:00.
Posted by Cash Crew at 8:10 AM 3 comments:

Cash Crew
We are the Cash's. Todd and I have been married 8 wonderful years and have 3 children to show for it. Livin life one day at a time is how we survive! It may be crazy at times, but we wouldn't want it any other way. Welcome to our world!

While driving in the car the other day Traekon said "mom when people talk it distresses me!" 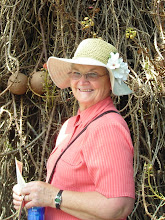 In loving memory of the Best Mom Ever! Taken home February 17, 2009

See what I believe 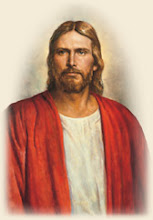 Our big almost 7 year old who loves basketball and soccer. He is super creative and loves making things with his legos!

Our 5 year old boss. Watch out cause if looks could kill this girl would be lethal! She may be small but she definitely knows what she wants! She's dicovered makeup and can't get enough of it. She's a beauty!

Our busy as can be 3 year old. The funniest little kid ever. He should become a proffesional airplane/car sound maker. He can't help but make noises! Life is great with him around!

other sites i look at